Life wouldn’t be the same without trees, in fact, there wouldn’t be any life at all on our planet if it wasn’t for the often-overlooked presence of these remarkable organisms which provide us with so much more than oxygen alone. Trees are, as you may have heard on many occasions in the past, the lungs of our planet and it wouldn’t be a stretch at all to say that we’re 100% dependent upon them for survival, making the trees in our backyards, gardens, parks and other places so vitally important.

Yet, despite our inherent dependency on the existence of trees and their many aesthetic charms which brighten our days and add glorious colour to our lives, many of us rarely give much thought to them. So, on that note, here are six amazing facts about trees, some of which may really amaze you!

The World’s Tallest Tree is Over 115 Metres Tall

The tallest trees in the world, giant redwoods are found throughout much of Northern California, with some located nearby to San Francisco at Muir Woods National Monument (at the Golden Gate National Recreation Area) if you’d like to experience the awe of these majestic giants for yourself.

Many of these trees grow to over 100 metres though the tallest of the lot is an amazing 115.61 metres in height. Named ‘Hyperion’, this coast redwood (Sequoia sempervirens) was discovered in a remote area of the Redwood National Park and is believed to be anywhere from 600 – 800 years old. So large is the tree, it’s believed to contain as much as 530 cubic metres of wood.

Contrary to what many people believe, trees don’t actually die of old age, they’re killed by disease, insects or, as is often the case, by people. Trees can live for hundreds if not thousands of years in the right conditions, with redwoods such as the Giant Sequoias and California Bristlecone (both are found in Northern California, like the coast redwood discussed above) living as long as 4,000 to 5,000 years. Moreover, trees grow faster the older they get, which has many benefits for us (see below).

One of the many essential functions that trees perform is balancing carbon and oxygen by absorbing the former and producing the latter. For example, a mature, 30-metre tree can absorb as much as 22.7 kg of carbon dioxide annually while producing 2,721 kg of oxygen. That means it can produce enough oxygen to support two people for a year while absorbing the carbon dioxide produced by two average-sized cars each driven 21,000 km over the same period. And as trees grow faster the older they get, both their carbon sequestration and photosynthesis capabilities increase over time.

The Largest Land Habitat is the Taiga

The Taiga, which extends right across much of Asia, Europe and North America, including Japan, Mongolia, Russia, Kazakhstan, Norway, Finland, Sweden, Canada and the US, comprises 29% of the world’s total forest cover, making it the largest land biome on the planet. As it’s a boreal forest, it’s a coniferous forest that features trees such as pine, spruce and larch.

While this land biome has always been subject to harsh weather conditions (the temperature can drop as low as −54°C and remains below freezing for half the year), it’s threatened by the forces of climate change and global warming as temperatures have increased significantly over recent decades. This is something that most of us don’t give much thought to as we don’t see the effects first-hand, however, just because we can’t see or don’t notice the effects of climate change, that doesn’t mean it won’t affect us all one day.

Half the World’s Plant and Animal Species Call Rainforests Home

While the Taiga comprises 29% of the world’s forest cover and rainforests just 6%, the difference in habitability overwhelming favour the latter. So inherently habitable and supportive of life are rainforests (not only the Amazon rainforest but rainforests the world over) that they contain around 20 – 40 million different animal species which is over half of all the plant and animal species in the world.

While many of those millions of species are insects, many large animals also call rainforests around the world home, including many exotic species whose habitats are threatened by deforestation and pollution. In Indonesia alone, two of the world’s most endangered animal species, the Sumatran tiger and the orangutan (the former numbers just 400 and the latter is the largest forest dwelling animal), are at great risk due to the destruction of rainforests to make way for palm oil plantations.

Trees Can Save You Energy and Money

Having trees at home can reduce your household’s energy usage and, therefore, save you money on your energy bills. By having healthy, well-maintained trees at home you can reduce the need for air-conditioning in summer and heating in winter by as much as 30% (air-conditioning) and 20 – 50% (heating). There are three main ways in which this occurs – firstly, trees provide shade, cooling the home in summer, secondly, trees transpire water into the air which helps to keep the temperature in the immediate area low (also cooling the home), and thirdly, they help to trap the heat in winter.

What’s more, this also has a positive effect on property prices and can raise the value of your home by a double-digit percentage. That’s a great reason to not only have large trees at home but to also have those trees cared for and maintained by experienced local arborists, like Tree Surgeons of WA.

We provide homeowners across Perth with a complete range of professional arboricultural services that empower everyone to keep their trees healthy, including pest and disease work such as soil drenching, foliar applications and stem injection, along with tree lopping services and many more. If you have any questions about the arboricultural services we provide to enable all Perth homeowners to enjoy amazing trees at home, please don’t hesitate to get in touch – 0418 943 086. 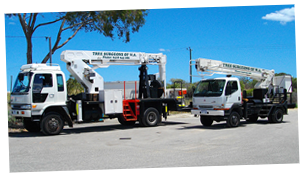 Do We Take Trees for Granted?
We often take many important things for granted, especially things that we assume will always be there because we’ve never known life without them, like trees, the longest living species on the planet. The importance of trees and the vital role they play in our survival can’t be understated as they give us oxygen and capture carbon, stabilise the soil and prevent erosion, and provide food for a myriad of wildlife as well as ourselves. Here’s a quick look at those benefits in greater detail.
New Website Launch!
Our newly developed website is now live and showcases our services and a vast array of photos from previous work.
Find Out Who We Are
Established in 1980 Tree Surgeons of WA has developed into company providing a comprehensive range of arboricultural services ranging from general pruning and removal through to transplanting and other specialized services including pest and disease management as well as high and low voltage vegetation management with qualified staff to undertake any project with expertise and safety. to find out more about, who we are, what we’ve done and who we’ve worked for, please read more by clicking here